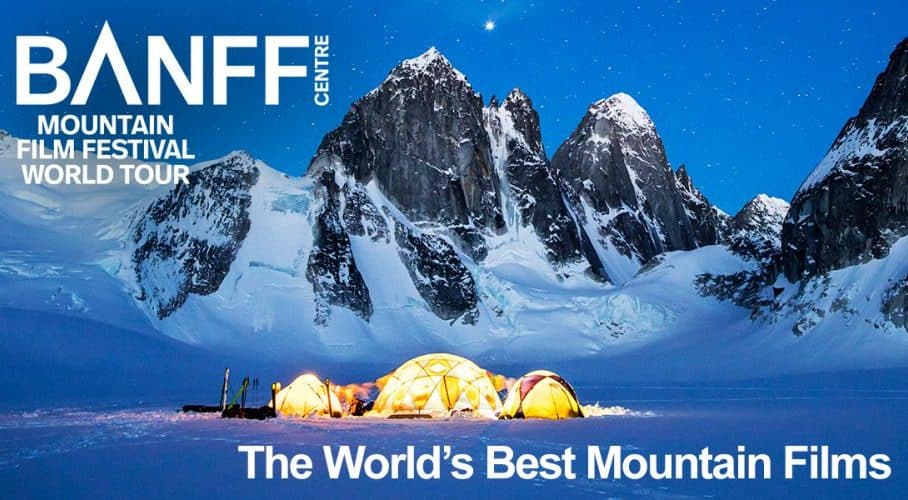 
Embark on a thrilling night of adventure with a brand-new collection of short films from the world’s most prestigious mountain film festival!

The Banff Mountain Film Festival joins the world’s best adventure film-makers and explorers as they push themselves to the limits in the most remote and stunning corners of the globe. Witness epic human-powered feats, life-affirming challenges and mind-blowing cinematography – all on the big screen!

There are two shows, each with an entirely different selection of films – the Red Film Programme (9 March) and the Blue Film Programme (25 May). Double the adventure by coming to both with a two-show discount. An adrenaline-fuelled, not-to-be missed event with free prize giveaways that is guaranteed to ignite your passion for adventure, action and travel!

Here’s the programme for the Red Film event:


Featuring a speed attempt of the West Highland Way by mountain bike; the most revered sport climbing route on earth; big mountain skiing in Iran and more, the 2022 Red Film Programme is a journey of wild adventure around the globe!

Stretching from Scotland’s largest city to the iconic highland town of Fort William, the 95-mile West Highland Way is a long-distance path loved by walkers. It’s also the subject of fierce competition between elite mountain bikers, all vying to set a fastest known time record on the challenging route. Enter former pro rider Rab Wardell, who’ll need all of his bike handling skills and endurance to make history in his beloved homeland.

Boasting narrow canyons, dramatic sunsets and illuminated hot air balloons, the unique landforms of Cappadocia in Turkey are the dream setting for a mountain biking spectacular. With mesmerising cinematography and phenomenal riding, immerse yourself in this colourful adventure with top riders Kilian Bron, Pierre Henni, Pierre Dupont and JB Liautard.

Big mountain freerider Fabian Lentsch leaves his familiar world behind to explore the peaks and culture of Iran. It’s a magical place to score incredible snow and experience a different way of life, but his year-long trip takes an unexpected twist in 2020, when military tension ramps up and covid hits. Learning Farsi, playing the Tanbur and skiing fresh powder, Fabian’s journey takes him deeper into the heart of this fascinating country.

From her bedroom window, Melissa Simpson has gazed at the highest peaks in Colorado for her whole life. They stand as a symbol of her greatest dream and her biggest obstacle because Melissa has cerebral palsy. With the help of her friend and mentor, blind adventurer Erik Weihenmayer, she sets out to conquer something far greater than a summit.

Italian freeskier Markus Eder set his sights on a seemingly impossible goal – to push the boundaries of three freeski disciplines in one ultimate top-to-bottom run. The result is a near-perfect ride, where the former Freeride World Tour champ takes us from the high peaks of Zermatt, Switzerland, to the valley bottom of Luttach, Italy, in a display of mind-blowing tricks and cinematic excellence.