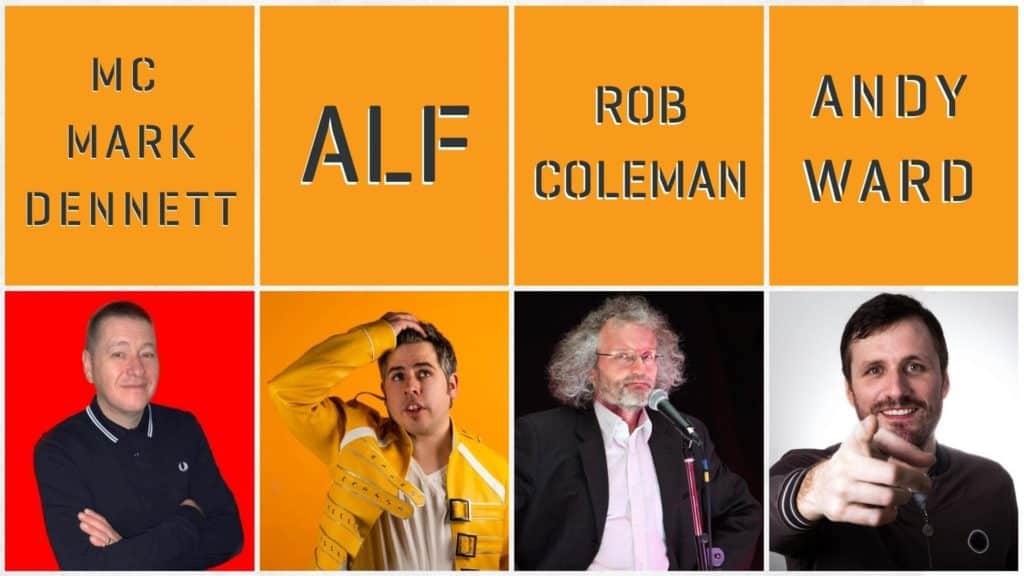 Our ever-popular Comedy Cupboard is back! 3 comedians and a new MC Mark Dennett.

A firm Old Bakery favourite, in 2016 Alf made it through to the ‘So You Think You’re Funny’ finals in Edinburgh. In 2017 he performed in the Comedy Gladiators Grand Final at Riproar in Bristol and won the Standup for Cider competition in Devon, and a Bedminster Comedians on the Run competition, and came 2nd in Frome Comedian of the Year.

In 2018 he auditioned for Britain’s Got Talent at the London Palladium and received a Standing Ovation.
In 2019 he was a finalist in the UK Pun Championships and the World One Liner Championships
In 2021 Alf released a Joke book, which is available on Amazon and was also a Semi-Finalist in British Comedian of the Year.

Rob has been a semi-pro stand-up for 15 years or so, closing, opening, and middling his way around the country with a mix of beautifully written gags and truish stories, together with some audience banter.

Along the way, he’s learned life lessons such as – ‘never take a first date to watch you perform comedy’ and ‘there are no 24-hour petrol stations in rural Wales.’

He’s become increasingly grumpy and his comedy focuses on (amongst other things) politeness, getting old, and the joys of long-term relationships.

Away from stand up. he recently rowed the Atlantic, becoming a world record holder in the process, and lives on a farm in rural Leicestershire.

With a delivery and use of language that is uniquely his own, Danny has been delighting audiences both at home and abroad for over a decade. With performances in over 16 countries, six solo shows at the Edinburgh Comedy Festival, and the winner of the coveted 2013 Amused Moose Peoples Champion Award for the best show you are guaranteed to be in safe hands. A star of BT Sports DIY PUNDIT, come watch Danny Ward live, it will be an experience you’ll never forget….no matter how hard you try.

Quotes:
A thoroughly entertaining show lots of laughter, great stories, and amazing what you can do with spaghetti spoons.’ ***** The Edinburgh Reporter
“Slick, quick, and packed with funny material” **** 3 Weeks Magazine
Enjoy a dose of ‘we’re all in this together with this comforting, hilarious, and slightly daft hour **** 3 Weeks Magazine
“Delightfully clever punchlines… He endears himself with an engaging if unusual style of language. Wordy but accessibly so, he throws in sneaky puns and well-hidden one-liners that reward the attentive listener without alienating anyone that missed them. It’s clever stuff.” – CHORTLE