Here at Experience Cornwall Tours, we offer private guided tours to secret spots and must-see landmarks and attractions, talk about our extraordinary history and colourful culture, giving you a true experience of Cornwall.

I have been lucky enough to live in Cornwall all my life, exploring its shores, creeks, moors, woodland and cliffs and lived within its unique culture. As the UK beds down for a 3rd national lockdown, I’m going to take you on a virtual day tour, showing you that Cornwall has so much to offer, all year around.

So, climb aboard our 8-seater VW bus, sit back and enjoy your winter Experience of Cornwall……..

We start our tour on Cornwall’s rugged North Coast at Godrevy, which is looked after and managed by the National Trust. The road and wooded walkway run’s half a mile alongside the stunning golden beach of Gwithian, which we follow until we reach Godrevy Point, which overlooks Godrevy lighthouse.

This octagonal lighthouse was built in 1858 to mark the hazards of ‘Stones reef’ which for centuries had previously caught ships off guard on its perilous rocks, causing numerous shipwrecks. In fact, in 1649 the reef wrecked a ship carrying personal effects of King Charles I, which included his entire wardrobe!

Gwithian is a beach loved by kite surfers and surfers alike. It stretches 3 miles, all the way to the Hayle river mouth, with a far reaching view to St Ives.

After watching the surfers and kite surfers play on the waves, we take a short walk to a secluded cove which is surrounded by 100ft cliffs, the perfect hiding place for a colony of native grey seals.

Surprisingly, winter is pup season for the Grey Seal, this is because the females need the summer fish bounty to put on enough weight to produce fat rich milk for their pups. From a bird’s eye view, we watch these large mammals clumsily clamber over rocks and rest, while the pups sleep, feed or chase seagulls! You can see here; it gets quite crowded.

A 13 min drive North on the B3301 takes us along a beautiful stretch of coast road, with far reaching views of the coastline, and the typical high cliffs which feature on the North Coast of Cornwall. We park at ‘South Drive’ car park to enter and explore the 250 acres of peaceful woodland, lake and oak forest at Tehidy County Park.

Tehidy was formerly the estate of the ‘Basset’ family, who were one of the most powerful families in Cornwall, with extensive lands and mineral rights to much of this Western part of the county. Inland at Carn Brea, the prominent hill near Redruth, you can see the silhouette of Sir Francis Basset monument, standing 90ft tall and built in 1836 to honour his life (1757 – 1835). The Basset family have been linked to Tehidy since the 11th Century. The main house of the manor was destroyed in a fire in 1919 and it was later rebuilt, and its purpose was an isolation hospital for patients with Tuberculosis. It closed as a hospital in 1988 and is now luxury private apartments.

We walk the colour coded tracks alongside the lake, where resident swans swim. We will also see numerous species of Duck, Mallard and Coot. There is a peaceful escalading waterway, where if you are lucky enough, you can spot Otters. But they are shy creatures, and I am yet to be lucky enough to see one!

While we enjoy a picnic lunch here, sheltered by the trees, we will probably be joined by some friendly locals! The grey squirrels. If you have a nut to feed them, they will come right up to you and take it from your hand, but be careful, they have sharp claws and teeth and remember they are wild animals.

14.00    Onward now to our next destination of the day – St Michaels Mount at Marazion – Just a 30 min drive from Tehidy on the North Coast, we cross the narrowest part of the county to reach the imposing, must see landmark of St Michaels Mount on the South Coast.

The town of Marazion is one of the oldest chartered towns in the UK, and Mounts Bay is where St Michael’s Mount dominates the landscape, sitting proud in this curved bay.

You can spend a whole day exploring this tidal island, but in the winter months the island is closed to the public. A walk along this shingle beach still gives you breath-taking views of this fairy-tale fortress, and if the tide allows, a close up of Island life.

The mount and castle are still home to the Aubyn family, where it has remained in their family since 1650. But in 1964, the National Trust was given the ownership of the mount, with the Aubyn family having a 999yr lease and with stipulations as to when it is open. The family chooses to close the island on Saturdays throughout the year, to give them and the 30 residents a day off. In peak season, the island can see up to 4500 per day!

The island has a true community feeling, there was once 300 residents on the island, who grazed cattle, ran a dairy, a black smith, serviced the chapel, and the working harbour for fishing and commuting to the mainland. Today 30 permanent residents help in the running and maintenance of the island, including its gardens which were planted in the 1780’s.

The Mount has a long history. It is believed that the mount was being used as a port between 400BC and 400AD for exporting Cornish tin and copper to the rest of Europe. Its position also made it an ideal fortress and was used during the war of the Roses and most recently in 1646 during the English civil war. But many people do not know that this tidal island was once in fact surrounded by an ancient oak forest! and so not an island at all. It has been a place of pilgrimage for centuries, after a local fisherman saw what he thought to be the archangel saint Michael. In the 11th century, King Edward the confessor founded the chapel, and gave the island to the Benedictine religious order to serve as a sister monastery to Mont Saint-Michel in Normandy – France.

16.00 Our final destination – A dip in ‘Jubilee Geothermal Sea Pool’ at Penzance

We take a noticeably short drive to our next destination, which is just 2 min down the coast from Marazion. This Victorian Lido ‘sea pool’ was built in 1936, the year of King George V’s Silver Jubilee. It was originally designed by Captain F Latham, a great engineer of the time. Its streamline seawalls protect the pool from advancing storms and prevailing offshore winds.

Despite its seawalls, in 2014 the pool was hit by a catastrophic storm causing so much damage it was uncertain if the pool would ever be reopened. But in 2017, the previously Council run and funded operation was taken over by Jubilee pool Penzance Ltd, which is a community run social enterprise. Jubilee pool is now community owned, with 970 local shareholders which raised £540k. The remaining £1.3Million came from a mix of grants from power to change, Architectural Heritage fund and the Cooperative investment fund.

To make it a viable project, the pool needed to be operational all year round. The main pool is 1-2 oC warmer than the sea temperature, so at this time of year a chilly 10-12 oC. The geothermal pool which we will swim in today, is a toasty 30-35 oC and has allowed all year round bathing. The system operates by pumping up warm water from 410m underground, from a thermal well. Cold water is pumped back down, meaning the system has a very low carbon footprint and is the first of its kind in the UK.

We hope you have enjoyed your virtual day tour of Cornwall, with Experience Cornwall Tours. Until we are able to take tours in person, stay safe.

If you would like to book your stay in Cornwall then check out our accommodation options and view our selection of beautiful Cornish properties. 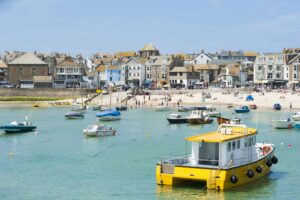 The 6 Best Hotels in St. Ives – Handpicked for You! 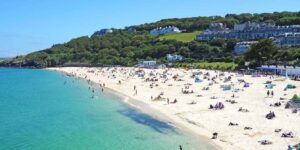 A Guide to the Best Beaches in St Ives

Are you looking for popular beaches with white sands in Cornwall? Maybe you are planning on a trip with family and friends but haven’t decided on a location yet? We’ve 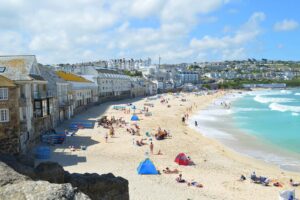 Things to Do in St. Ives

St. Ives, Cornwall is one of the most popular destinations in the world and for obvious reasons. It’s home to lovely beaches, exciting boat trips, spectacular views, fun surf schools, 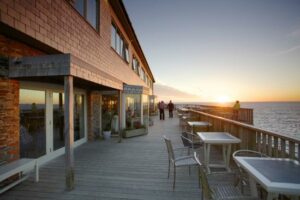 If you’re looking for a romantic getaway, Newquay has a lot to offer. It has several sandy beaches to choose from and it even has some of the best surf